What Healthcare Can Learn from the World of Entertainment 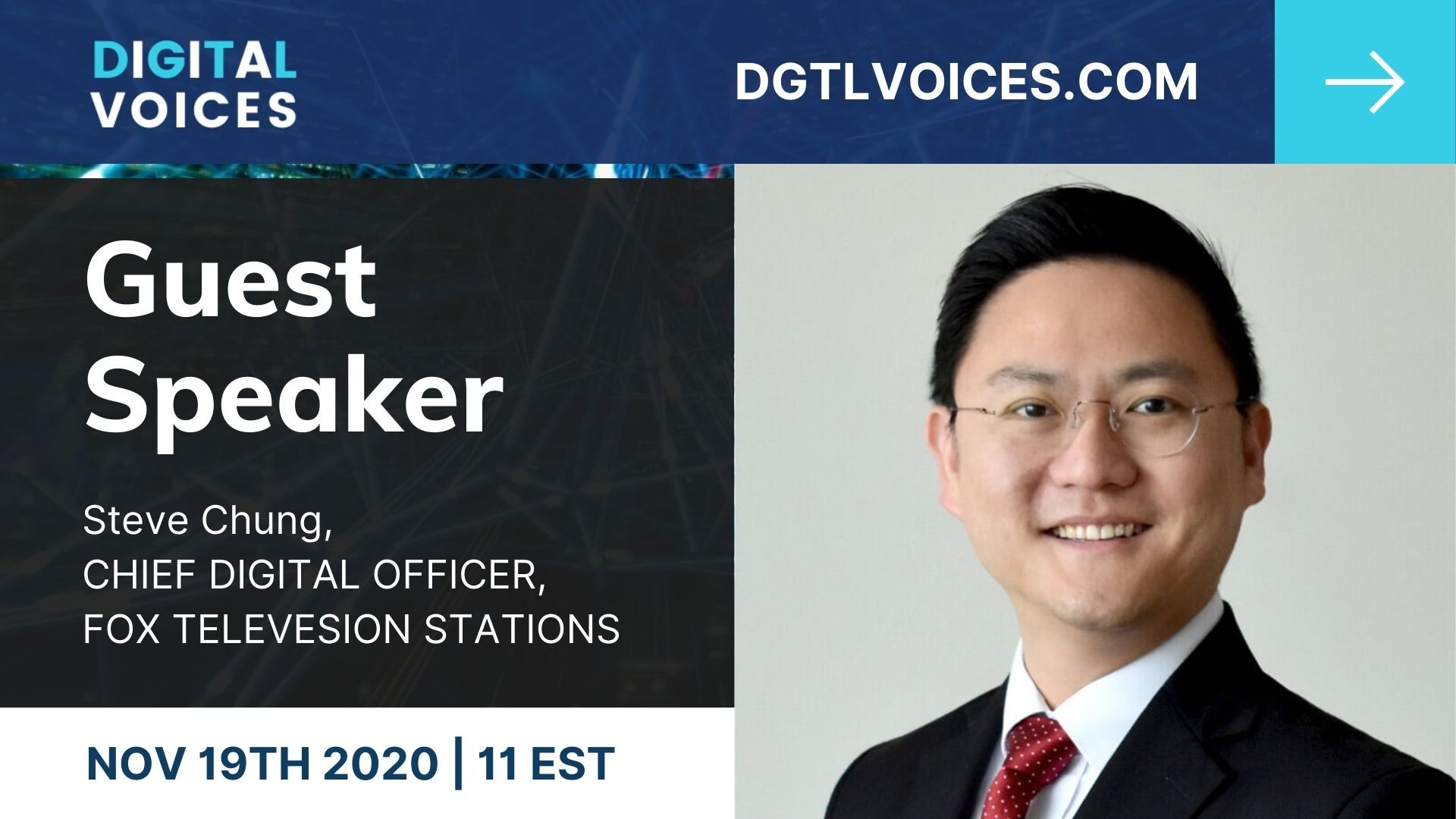 Justin Stayrook, Head of Customer Experience at BORN agency introduced Steve Chung, CDO of Fox TV, to the DGTL Voices event with many questions as to what healthcare can learn from the world of entertainment. Fox is not in the healthcare industry, but was welcomed as an alternative perspective to the chat.

Steve Chung was the first chief digital officer for the FOX group. With 18 stations around the country owned and operated by FOX, he is CDO for the local television portfolio within FOX and the chief executive of the digital business. Traditionally, FOX has been a television operation, but as habits change to consuming media over the phone, through the desktop or Fire TV, there are lot of different things that go into consuming, producing and distributing media on digital platforms.

The DGTL Voices audience primarily focused on digital and healthcare, so being that you are in television media, can you describe your personal roadmap and challenges?

I recently had an aunt who was involved in a serious accident that resulted in serious brain surgery, and as such over the past two months I've had the chance to interact with the healthcare system and the digital and not so digital parts of it. That is part of the reason that I wanted to come and speak with you today. I think that we are in some ways very similar. Media and healthcare have been around for as long as we've known them, but in different forms.

I think there are two parts to consider: what do we do in our day-to-day mission that can be enhanced by digital workflows and we can use technology to accelerate what we have traditionally done. The second part, which may be a little bit more of the frontier part of digital as a medium in it of itself. A little bit more than optimizing your work flow. For us, as an example, it is all the new devices that are coming to the market. Today, the remote has been replaced by a fire tv or an apple tv remote. Now, the choices and interactions are very different. How do we not just take what did before and adapt it to these new technologies and instead take these native platforms that offer so much more in terms of interactivity? How do we use these digital tools to create new kinds of content and interact with our audiences very differently as a medium.

Healthcare similarly needs to look within itself to find ways to improve further. I had a chance to do a video call with my aunt who was in a surgery ICU for several weeks and with COVID-19 we couldn't visit her in person. I believe it was a valiant effort, but the user experience from being able to connect to that patient in that room was something to be desired. Even though I think the hospital did the best they could, I think there is a lot of opportunity for healthcare to improve, and what better mission than to save live and keep us well.

In the next few years, what are the biggest challenges who are in the midst of ongoing digital transformation? Do you see any parallels with your industry and the healthcare industry?

All the tactics of how to make a digital business successful is arguable the easy part. There are people who know how to do that and if everybody has enough time, money and focus, you can do that. I actually think the biggest barrier to customer driven transformation on digital is the status quo and the traditions of the decades and centuries of history that our respective industries share. For the healthcare industry, you have a core business model and the whole system has been built around that and that's a lot of baggage to carry. While everybody might understand that if we do it this way it will benefit the patients, the healthcare providers, the insurance companies and everybody associated with it, but you just can't get there because you there is so much you have got to pull through.

The best analogy for our industry has been Disney plus. FOX competes with Disney and we fight vigorously for ratings and relevance. The moment Disney Plus became a thing and said they were all in on this new digital front and we are going to publish all of our great assets are gonna go to focus on Disney Plus, all of the traditional models of selling our content to cable partners and the whole infrastructure of the business had to go to the wayside. Prior to Disney Plus, digital was cool but didn't generate the significant revenue relative to the core business. It was something that we all knew we had to do, but it was really a catalyzing moment were it really meant billions of dollars for the respective organization.

Disney plus is not only the moment that consumers were shifting that way, but the shareholders and the investor community started to focus on competitors like netflix, hulu and other digital companies that disrupting traditional media. It was a perfect storm of breaking through. What are you going to do with all those traditional businesses generating cash flow? We love to pick on blockbuster. We all knew and loved blockbuster, except for the fact that you had to pay late fees. Then came Netflix and Blockbuster said "What do we have to go into digital for? We have a great business here" and we know how that story turned out!

I don't know what that moment is for the healthcare industry, but it is certainly going to be a tough slog if it's just going to be an organic, internally driven process. There has got to be a big catalyst, and maybe that is covid or maybe something else that really shifts everybody forward. For the television industry that was Disney Plus, and I hope there is that moment for the healthcare industry for the benefit of everybody.

Watch the full DGTL Voices recording over on our YouTube channel!