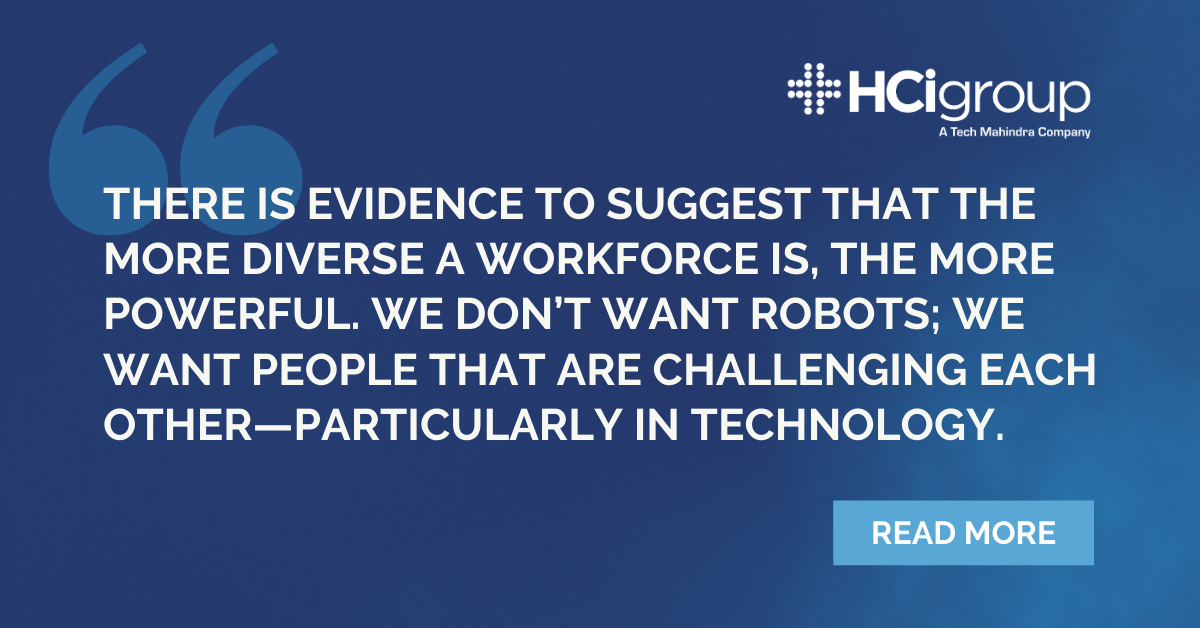 In our latest HCI live interactive webinar series, Race Relations in Healthcare IT, The HCI Group was pleased to welcome Cletis Earle, Senior Vice President and Chief Information Officer for Penn State Health and Penn State College of Medicine. Cletis was joined by Ed Marx, HCI’s Chief Digital Officer and former Cleveland Clinic CIO who led the discussion. During the 30-minute session, Ed and Cletis discussed the race disparity in healthcare and had an in-depth discussion of Cletis’s own experiences as a black executive in the healthcare industry.

“I think that this problem is an ‘our’ problem, not a ‘certain peoples’’ problem. I think this going to require us to have these crucial conversations. Let’s stop pretending we can’t have this discussion. Let’s talk about it. Only when we talk about it, are we going to be able to do something about it… We have to do exactly what we are doing right now, which is having a real conversation, a real discussion, and not being afraid or apologetic. There are ways of having this communication, having this dialogue without being disrespectful. We can have a very civil and pointed discussion as to how we can move the dial. This is a social issue, just like obesity is an issue. This is something that is like any other epidemic or a virus, we have to start early.”

Ethnicity and Race Disparity within Healthcare

Ed Marx: Welcome Cletis, thank you so much for being my guest. Can you share a little bit about your personal and professional journey [in Healthcare and Healthcare IT], and tell us all about your own unique perspective and experience as a black man in America and in the healthcare industry?

Cletis Earle: Hi Ed, and thanks so much for having me on. I am Cletis Earle, I am the Senior Vice President and Chief Information Officer for Penn State Health and Penn State College of Medicine. I’ve been there for about six months, and the last six months have been something — never thinking that coming on board we would be dealing with COVID and seeing the disparity between ethnicities and races, between blacks, whites and Latinx communities, knowing that there is a disconnect. Then also on top of [that, dealing with] the race issues that we are having. I think it’s imperative for us to have this discussion, so I appreciate the HCI Group, Tech Mahindra, and Ed for reaching out.

I’ve been [at Penn State] for six months, but prior to that I worked at other healthcare systems. My roots are very diverse—I was born and raised in the New York City area—a pretty robust melting pot, as you know. In my youth, I went to a school in Queens, New York that was predominantly black. While we did have various races represented, I soon realized after I graduated high school and went to a predominantly white [college] that the world was different. [For instance,] being in a bathroom stall and then seeing significant use of the N-word language there, it was more of, ‘Okay, now things are different.’ So, I started from an understanding that the world was not equal. As I worked through various different industries, seeing the dynamics, things didn’t really change. From my experience coming up as a technologist in management, and being in an executive role, all things are not equal, particularly for people of color.

First and foremost, I’ve been a member of the College of Health Information Management Executives (CHIME) for some years now. Years ago, when I first started going to CHIME events, I used to see a majority of white male CIOs. As the years progressed, I started to see more Caucasian women and other ethnicities represented, which was great. But there were only ever a handful of black CIOs, even years later. This shows a significant disconnect in our communities and how we are represented or underrepresented, because, again, a lot of these healthcare systems are in areas of color, or in large [diverse] communities, and it shows that the reflection of corporate leadership does not reflect [the populations] in those communities.

So, I applied and was elected to be on the board of CHIME and helped to represent the cause and to make a change. A couple of years in, I was elected Chairman of the board. As the first African American Chair of the College of Health Information Management Executives, it was powerful and had a lot of weight associated with it. What I wanted to do was put a legacy of diversity in place. As a result, we created a diversity committee to see what we would have to do inherently to start to change the dynamic of healthcare IT professionals; making sure we were doing activities to create additional awareness within the industry. That effort has continued after my board chairmanship ended, and now I am chairman of that diversity committee. But, [my experience] is that when I go to new organizations and look around, I realize that there [still] are not many IT professionals that look like me. The key here is we are going to have to think about how we make that change. I’m glad to hear the effort, I’m glad to be having that conversation and I’m happy to be here.

Unconscious Bias in the Workplace

Ed Marx: This obviously has to be talked about and addressed, because it is an issue. Can you give one or two examples of how some of that bias or racism takes place in the workplace today?

Cletis Earle: There are a couple of things that happen on almost a daily basis. I have people come to me and use words that [show] an implicit or unconscious bias. I’m pretty sure for people of color, or for women, they may hear statements such as, ‘Wow you are so articulate,’ or ‘You speak very well.’ That is almost code for ‘You don’t sound like the rest of them.’ These are statements that occur on a consistent basis that people of color—black men and black women are tired of hearing. Its no different than people saying they want to touch our hair. We have to get out of these cycles where things are said that just shouldn’t have any place in our world.

[Another example] is when you hear people say, ‘I don’t see color.’ You may not think its negative, but let’s be realistic, we all see color. You see color. I see color. We all do. The question is how do you respond to that? We need to stop with this fake concept of, ‘Let’s act like this doesn’t occur.’ I think what we have been doing for a long time is sticking our head in the sand. The beauty here is that we are seeing the next generation saying, ‘We’re not going to stick our heads in the sand, we cannot continue to see people of color butchered in the street. This is murder. We want to make sure we put a stop to that.’ I’m very happy to see this generation saying enough is enough and doing something about it.

Ed Marx: What are some practical things that CIOs can do to ensure that there is equality and advancement for everyone?

Cletis Earle: I think that this problem is an ‘our’ problem, not a ‘certain peoples’’ problem. I think this going to require us to have these crucial conversations. Let’s stop pretending we can’t have this discussion. Let’s talk about it. Only when we talk about it, are we going to be able to do something about it. As a black executive, and I believe this is true of others as well, sometimes you feel that your voice is unheard. [As a] black executive, you do not feel you have the ability to speak out. Many times, you see when a black executive, someone of color, or a woman speaks out, that those people are vilified. This is a problem in our society, because if someone speaks on something that is uncomfortable, they are automatically put into a box, and they are automatically asked to be quiet. We have to do exactly what we are doing right now, which is having a real conversation, a real discussion, and not being afraid or apologetic. There are ways of having this communication, having this dialogue without being disrespectful. We can have a very civil and pointed discussion as to how we can move the dial. This is a social issue, just like obesity is an issue. This is something that is like any other epidemic or a virus, we have to start early.

Whether its technologists, CIOs, or other executives, go out to your communities, places of color, the under-served. The communities that have no idea the opportunity of what healthcare IT or what technologists can provide. I’ve done some sessions where you go into schools, and I say, ‘I’m the CIO.’ People look at me like ‘What the heck is that?’ They have no idea what a CIO is. That tells me, they are focusing on, ‘Yeah, we know rappers, sports people, influencers.’ This is their new norm; this is what they see. What we need to do is go out and show people that the world is much bigger. We can go out and ask people and start early, start when they are young. Educate them. Show them there are other opportunities in technology, whether its healthcare or other areas. Show them that you can get to where you want to be without traditional methodologies.

Ed, I have a question for you. How many industries do you know where a person can make a six-figure salary without actually going to college?

Ed Marx: IT is definitely one of those.

Cletis Earle: One of the few that I know, based on certifications [or other qualifications]. I’m not promoting that people don’t go to college. I think you still need that paper, because you have to remove all excuses. And as a person of color, it is imperative that you remove the excuse. This is the problem again: ‘Why do I have to have a different set of principles than my colleagues?’ So, let’s remove the excuses, but tell them and show them that there is a pathway that they can actually progress. You can make a decent living in this sector, in this arena. We need to help promote that more and more.

There is evidence to suggest that the more diverse a workforce is, the more powerful. We don’t want robots; we want people that are challenging each other—particularly in technology. That is how we can become more productive. We see that a lot through the worlds, we just need to catch up.