Physician Adoption and Satisfaction Before & During Go-Live | A CMIO Perspective 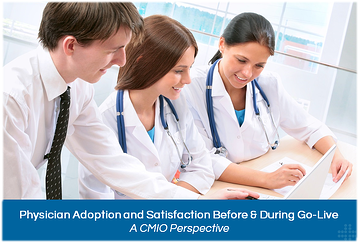 In this article, Shannon Stinson, MD, FACEP looks at how she approaches the issue of physician adoption and satisfaction before and during Go-Live. Shannon is Board Certified in Clinical Informatics and Emergency Medicine and has been involved in several implementations and Go-Lives from her experience as a CMIO at University Healthcare System and as a consultant.

Awakened from a horrible nightmare, I sat bolt upright in bed.  It was day 1 of Go Live for our new EMR, and I was working the night shift.  In my dream, I had forgotten my password, could not get anyone in IS to reset it for hours, and once I did get into the system, I could not remember anything from my training which occurred months prior.  The reality was only slightly less frightening.

That was the last month of my second year of residency and my first Go Live experience. It was definitely the most traumatic, and I complained—loudly.  That was probably how I ended up being one of two residents on a committee for the hospital to improve the system and why I later volunteered to be a superuser on call over the next year.  I learned a considerable amount about how end users, and physicians in particular, feel during such an event, and I wanted to find ways to make using the system easier.

Fast forward to two years after residency where my complaining landed me a job as a Physician Champion working to improve our upcoming McKesson HEC upgrade in the Emergency Department.  Following this role, I was asked to become the Medical Director for Clinical Informatics to help support the hospital physicians through the upcoming McKesson CPOE implementation.  Subsequently, the organization made the decision to switch to Epic as the system-wide EMR, and I was asked to start an Epic department and lead the implementation with a title of Chief Medical Information Officer.  My perspective about implementations has changed as each new position has offered me increasing insight, but my ideals never have.

You see, physicians are used to being in control of everything in their work environment, and learning a new system can completely disrupt their confidence and be extremely frustrating.  Looking at the system and wondering why you can’t just program in your typical exam and modify what is abnormal for each patient is frustrating.  Eternal mouse clicks are the worst and probably the biggest complaint I have with EMRs, as do most physicians.  The human-computer interface, that is, the portion of the EMR that end users see, is often less than desirable.  In addition, the amount of information that is now contained within an electronic record can be overwhelming, and navigating all that information is difficult if not designed properly.  Understanding the coding behind the build helps to explain some of these issues to physicians, but in reality, what physicians want is to be able to get their job done in the quickest way possible so they can take care of the next patient, get home to see their family, or get some physical activity like they tell their patients they should get.

There are several things that need to be done to ensure that the EMR being implemented is optimized to maximize efficiency.

For all end-users, but physicians in particular, you must involve them in the process.

Involve them in designing the things that affect them most—the order sets, documentation tools, and workflows.  They are the ones using the system and should be the ones who, within reason and in the constraint of policies, procedures, and regulations, determine the content.  I cannot overemphasize the importance of workflow analysis and design enough.  This is key, especially in physician practices, in ensuring both the implementation team and the end users are successful.  In every instance in which I have been involved, when my team and I adequately involved the end users, we were wildly successful.  For those situations where we did not, we failed miserably.

I have also found phenomenal success with bringing in dissenters in the above processes.

You know the ones—those physicians who are most vocal in meetings and to their peers about their vehement disgust for an EMR and how it will completely destroy patient care.  Persuading one or two of those people, especially if they are in diverse specialties, to help with the build and design the system the way they want to see it, is the best thing that can be done.  A miraculous thing happens when you do this…they go from being the ones who were adamantly against the system to the ones supporting it the most in front of their colleagues.  It is one of the most powerful things I have found to promote buy in with a group of physicians.

During the actual Go-Live, having adequate support at the elbow is important.

I use the ratio of one support person to every 2 providers for the first 2 weeks with tapering support after that for an additional two weeks.  If this is not possible, it is beneficial to have a physician-specific help desk line where physicians would receive priority for calls made to obtain support.  Physicians often learn the steps to get through patient care in the beginning (i.e. “survive”), but there are often ways to streamline the steps they have learned which will help speed up their day (i.e. “thrive”).  Therefore, it is also a good idea to have someone come and “shadow” the providers 4-8 weeks after Go Live to offer tips and tricks for streamlining their workflows.

While every EMR is different and each has its benefits and drawbacks, and every Go Live is difficult for the end users at first, utilizing the above in the implementation phase will help ease the difficulties involved in the Go Live and post-Go Live phases tremendously.  It  may even result in, dare I say, a pleasant experience for all involved.