IT Leaders in the NHS | Interview with Mike Jones 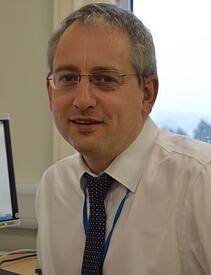 Mike Jones has been the Director of IM&T/CIO at Northern Devon Healthcare NHS Trust since November 2012. In his previous role, Mike was the Director of IT for an IT Shared Services organisation in Greater Manchester.  Mike's professional challenge on joining Northern Devon was joining an organization that was embarking on a massive integrated Electronic Health Record procurement implementation. This transformation programme is what attracted Mike to the role.

The HCI Group spent some time talking to Mike about the challenges of implementing EHR's in the NHS, integrated systems vs best of breed and the benefits of funding and incentives when implementing an EHR.

What are your top IT challenges over the next year?

Over the next 12 months our challenge is to ensure that we’ve got a full level of clinical and operational engagement from the organisation, wider stake holders like our commissioners and other agencies that we work with in the EHR programme. It's about making sure they fully understand what’s coming and what’s expected of them in terms of transformational change. We need to convince them that we are on a journey to improve quality, safety and efficiency of care and we want to do that by making best use of EHR technology but also technology that will support that such as mobile platforms and potentially the use of social media tools to augment the use of EHR’s.

What are your views on fully integrated systems such as Cerner, Epic and Allscripts vs the best of breed approach?

I wouldn’t want to say that one is better than the other in all cases. Having said that, I do think that it's sensible to get all your different modular levels of functionality such as pharmacy, lab systems, PACS into one system where the record behind it is a single integrated system. I think that in the long run it will work out cheaper than trying to link and integrate different systems together.

From my own experience, making two systems talk to each other is complex and costs money. There isn’t one system to rule them all so you end up with some level of best of breed approach.  If your hospital can start with a clean slate and replace all the legacy systems with a single system and you have the money to do it and if you can cope with the complexity then that for me seems more sensible in the long run.

If you get an integrated system in and working then you’ve cracked it.  The question then is can these suppliers maintain that breadth and depth of functionality?  There are really good systems that are often developed by clinicians in the field for that specialty and are very rich in functionality but the issue comes in trying to get them to talk to other systems.

Do you think the NHS could benefit from proving similar EHR incentives to those in the US?

This is my personal view; I’ve been to the US and seen some of these systems and participated in the debates over there around things like Meaningful Use and I’ve gained an understanding of their incentive schemes for hospitals and providers to move towards EHR’s. It is certainly a very useful framework with the maturity models that they have for EMR adoption. The HIMSS model for example, and the Meaningful Use that goes with it is very useful to get people engaged.

I think the US is further ahead, I read somewhere that around 7% of providers in the States are on some form of fully integrated EHR and it is more like 3% or 4% over here. I think that over the next 10 years we will see quite a significant increase, uptake and awareness for organisations to respond to the demand of the population as people are living longer with more complex conditions. You have to look to different ways of delivering healthcare and the EHR when it is done properly will make a difference, it will make care more standardised, streamlined and efficient.

We are still largely paper based with a lot of administration, with an EHR there are a lot of inefficiencies that can be driven out. That said, the focus is primarily on improving patient care and improving the working life of clinicians who are very busy on the ground.

Do you have any final thoughts?

It’s a very exciting time for healthcare IT, I think this most exciting time I’ve seen since before the National Programme. There was a lot of hype and people getting excited but in the end it didn’t deliver when it came to care records – the ‘national care record service’ didn’t come about through NPfIT. Now you have a lot of people feeling more positive about it (probably that has come from the fact that there is more freedom to go out and buy stuff yourself) but the challenge will be to get the business case when there is an increase in demand and the funding is not there. We are not getting the same levels of increase a year in our funding which we had 5-7 years ago. We have probably seen a 1 or 2% increase in funding, so you have to ask where does the extra money come to invest in an electronic health record?