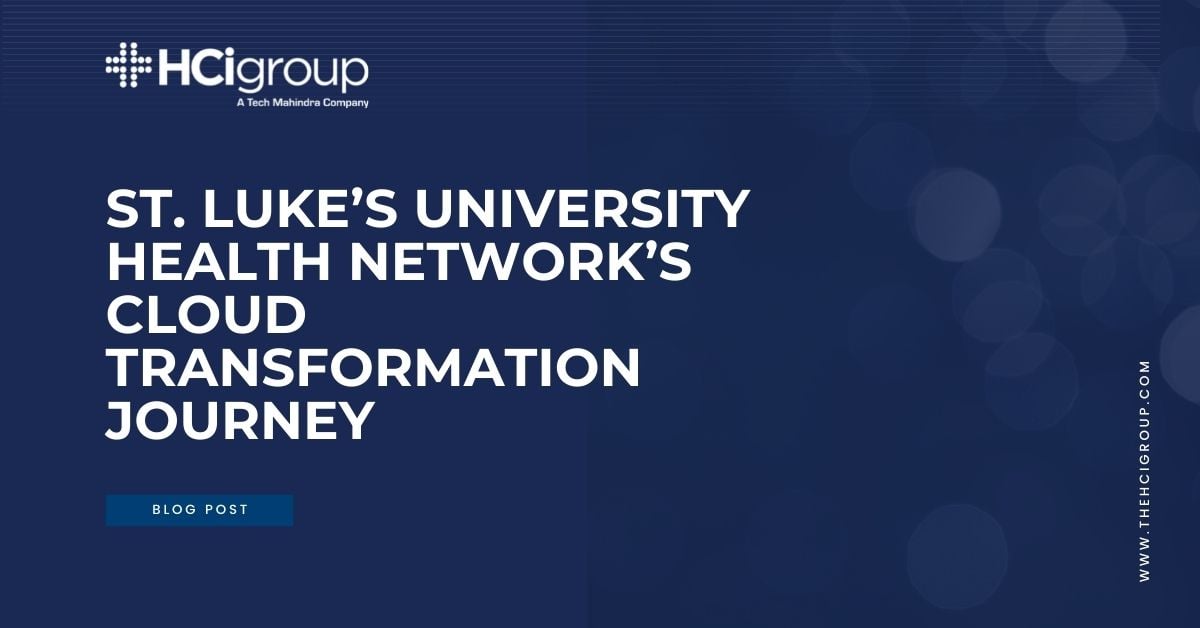 After successfully implementing Epic across all of its sites in 2016 and 2017, St. Luke’s University Health Network decided to optimize its infrastructure and assessed the benefits of on-prem, hosting, and cloud. From these findings, St. Luke’s made the strategic decision to pursue a cloud transformation journey.

In a recent webinar hosted by The HCI Group, journey participants explored the technical, operational, and financial outcomes that St. Luke’s is realizing through its cloud journey, as well as some of the challenges faced and lessons learned. A non-profit, regional, fully integrated, nationally recognized network, St. Luke’s provides services at 14 campuses and more than 300 sites across Pennsylvania and New Jersey.The following insights are excerpted from the St. Luke’s University Health Network’s Cloud Transformation Journey webinar featuring:

Chad Brisendine: In 2017, we were learning a lot about the cloud through areas like Gartner and other healthcare systems that were beginning their cloud journeys. We weren't quite ready but we were in the early stages because we knew we needed to start thinking about it.

It wasn't until 2018 that we really got serious. Then in 2019, we began working with Tim's team and The HCI group to figure out how to get to the cloud, knowing that we were going to be an early adopter.

We had already been doing a strategic digital transformation journey with Microsoft and put together a whole bunch of initiatives in our clouds as part of that process. We had the options of either staying on-prem, moving to a remote-hosted situation where somebody else managed it, or doing our own thing in the cloud.

Brisendine: One of the core assumptions we made was that security in the cloud was better and we had our team confirm. That was a positive for us. Also, we thought we were going to save money and that assumption proved true too. So we had two checkmarks and we had them both validated.

We’ve done the same thing with our financial model. We’ve saved about 20, 22% from what we had on-prem. We’re seeing a lot of savings on the compute CPU side and a little more cost on the storage side, but that’s just how things are designed in the cloud and how we had it implemented.

The third thing is that we knew from an elasticity standpoint that the cloud would help with the growth we were having. We had been doing mergers and acquisitions and our CEO wanted us to keep doing them faster and faster and faster. With the cloud, we knew that if they decided three months from now that we were going to do X, Y, and Z, then we could really move quickly. And with our last hospital, which was a 120-bed integration, we did the whole implementation from end-to-end in seven weeks.

Brisendine: I'll give you two stories. One is we had early on in 2019 when our team wanted to get comfortable with the cloud. The first thing they did is they moved the internet service to the cloud. I think it was four systems. Our team was feeling good about that and then we had a bunch of different systems go live from a patient access standpoint functionality that went live.  We were able to scale that very quickly.

Then fast forward to the end of 2020, the beginning of 2021, by when we had our MyChart servers in the cloud already. We were fortunate that when the [COVID-19] vaccine hit and phone lines were busy and MyChart went out of the roof, we were able to scale up within a couple of minutes to meet the demand. If we would've been on-prem, it would've taken us forever to figure out how to get that scalability. It would've probably been a good week or more for us to figure that out or take capacity from somewhere else.

Conaway: The care providers have a big role in this too. How were they affected by the applications going to the cloud? Did they have any concerns?

Brisendine: They didn’t even know because we didn’t tell them until like three months after the cloud went live. Now, a core group of our physicians knew because they were part of our champion group. But we asked them not to tell anybody and to work in the cloud instead and give us some feedback. And between the cloud monitoring that we have with Microsoft and the monitoring we have within Epic, we knew physicians weren't impacted from a performance standpoint.

Also, we took no down times to make this entire change, which is even more amazing. We were moving pieces and parts and were running both in the cloud and on-prem at the same time for a period. Then we did the final migration. So users were kind of in both over time and with VMware and Citrix and Epic and the way the cloud’s designed, our team was able to test things and migrate them over a period, which was nice.

Conaway: Tim, what lessons have you at Microsoft learned? How do you move forward?

Tim Gray: We have just kept pushing forward and some of our other customers have come forward with some additional feedback around the benefits. One that stood out recently involved computers not freezing. Clinicians were calling their IT help desk because their system would freeze and they would have to reboot their station. The customer has seen a reduction of 57% fewer call-ins for that reason. So, their clinicians are spending more time caring for their patients. They’re not worrying about the computer freezing up. The more and more we see this, the more and more we're going to see more of our providers look to the cloud as the base of their care.

Conaway: Was there anything unanticipated that ended up being a benefit? Something that you weren't thinking about but you're looking at now and saying, ‘Hey, I wasn't thinking that, but this is wonderful.’

Brisendine: Yes. The backup and recovery piece. I won't mention vendor names but I'll say that our team has loved our backup and recovery system. They’ve had a lot of great stories and success. We were able to reduce the cost of it by 50% and get a lot more functionality out of the new capability in the cloud. The second piece of that story was the cold storage with our system from a security standpoint, so that if our data gets compromised, then you can recover from that copy.